Emory University is ranked among the top 20 research facilities in Atlanta, Georgia.  The university houses a diverse community with its members working in unison for a single goal of bringing positive transformation in young minds.
The Emory University in Atlanta has a history of excellent teachers, researchers and scholars.
Emory University in Atlanta was originally established as a college in a small town of Georgia in 1836. The school was named after a bishop who believed that the American educational system should mould characters alongside educating the mind.
The University enjoys an outstanding recognition worldwide for its liberal arts college, professional schools along with the leading health care systems in the region.
Emory University also maintains the legacy of energy of the region by providing a perfect collaboration among its various schools, research institutes and other affiliated institutions.
• Emory College of Arts and Sciences
• Goizueta Business School
• Nell Hodgson School of Nursing
• Oxford College
• James T. Laney School of Graduate Studies
• School of Law
• School of medicine
• Rollins School of public Health
• Candler school of Theology
Campus:
The main campus of the university covers around 600 acres in Atlanta`s suburban area of Druid Hills. The inmates of the campus including students, staff, faculty, and visitors enjoy a serene environment. 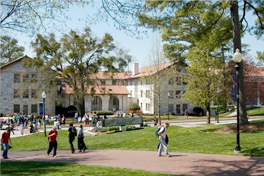