The College of William & Mary

The College of William & Mary is a public research university situated in Williamsburg, Virginia. It is also known as, W & M, The College or William & Mary. It was established in 1693 by the British government’s Royal charter which was issued by King William III and Queen Mary II.

The College of William & Mary is the second oldest higher education establishment in America.

This college has a famous undergraduate program. Moreover, it also includes various schools for professionals and graduates.
The institution offers bachelors, masters, doctoral degree and first-professional degrees. It also offers postmaster certificates.
The College of William and Mary has a semester-based curriculum calendar system. It offers forty one majors out of which the most popular are Management, Business, Psychology, Law and Political Science.
The ratio of student to faculty is 7:1.
Campus:
The College of William & Mary spans over an area of twelve hundred acres in Williamsburg, Virginia. It is a historic building and the oldest in the United States.
The ancient Campus consists of three units; The Indian school, The President’s house and The Brafferton.
The College  has a temperate climate. The campus has a lake of its own in addition to an open air theatre. Washington D.C. is only one hundred and fifty miles to the North. The Virginian beach is just sixty miles. 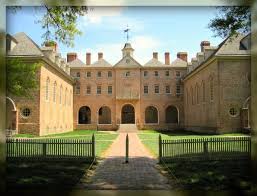