Syracuse University is located in Syracuse, New York. It is a private research university founded in 1832 by the Methodist Episcopal Church. Later, the same church also founded the Genesee College.

The University itself in non-sectarian despite its affiliation with the United Methodist Church. In 1966, Syracuse University was elected to the Association of American Universities.

The University campus is located near downtown in the neighborhood of University Hill. It has a large campus consisting of nineteenth century structures as well as modern buildings.
The campus of Syracuse University has a diverse assortment of buildings that range from Romanesque structures to modern buildings designed by world-famous architects.
The main campus is also called the North Campus that contains academic buildings and residence halls. Its centerpiece is called the Quad.
The main campus is known as the North Campus and contains all academic buildings and residence halls. It represents a large portion of the University.
Main Programs:
Syracuse University has thirteen schools and colleges and offers the following programs:
• Information studies and library science
• Business administration
• Public administration
• Architecture
• Communications
• Engineering.
Syracuse University also has athletic team – the Orange which participates in intercollegiate sports.
The university is also a member of Eastern College Athletic Conference.
From its founding, through the 20s, Syracuse University showed steady growth. The programs offered in the beginning were physical sciences and modern languages. Later architecture and fine arts were also added. The first doctoral program of Syracuse University was added in 1911.
The school of journalism was added in 1934. There were two men who were responsible for changing Syracuse University from an arts college into a comprehensive university – James Day and John Archbold. John Archbold is the president of the board of trustees of the University.
Syracuse University transformed into a research institution after the second world war. The G.I. Bills resulted in increased enrollments. By 50s, Syracuse was ranked 12th nation-wide.
In 50s and 60s, Syracuse University added more programs. Syracuse University was admitted to the Association of American universities (ASU) in 1966. ASU comprises of leading American universities that maintains a strong research and education system.
A Board of seventy trustees governs Syracuse University. They also include two students and one faculty member as non-voting representatives to the Board of Trustees. 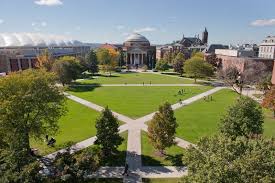