The University of Miami

The University of Miami was founded in 1925 as a private, non-sectarian educational institution. Its main campus is in Coral gables, Florida, a medical campus in Miami city proper and a research facility for oceanography on Virginia key.

The number of current student enrollments is fifteen thousand six hundred and twenty nine.
These students were enrolled in around one hundred and fifteen undergraduate, one hundred and fourteen masters, fifty one doctoral and two professional areas of study.
These students pertain to fifty states and one hundred and fifty foreign countries. The number of faculty staff is around thirteen thousand.
Each academic unit has its own research component.
University of Miami has a large library with more than three million volumes and also has a sizeable holding of Cuban music and heritage.
UM offers a wide range of student activities including a student newspaper and a radio station. There are also athletic teams; the football team of the University of Miami has won five national championships.
UM was charted by a group of citizens in 1925 so that it could offer opportunities for inter-American studies and further creative work in arts and letter, and also to conduct teaching and research programs in tropical studies.
In 1925 George E. Merrick gifted 160 acres and around five million dollars with which the University of Miami was founded with a charter of Circuit Court for Dade County. In the next fifteen years the university would barley make ends meet due to a collapse in the land boom.
Campus:
The main campus of the university spans over 260 acres in the southern part of the city of Miami. Most of the university’s academic programs are located on this main campus. It has seven schools and two colleges including a law school. 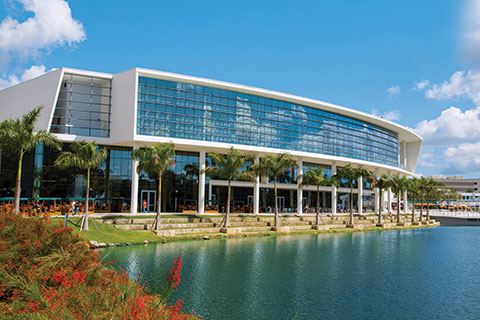