The University of Washington at Seattle

It has three campuses. The biggest campus is in the University district, Seattle. The annual budget of the University of Washington is more than three billion dollars. It has more than five hundred buildings and a space of approximately twenty million square feet.

The University of Washington stood sixteenth in the rankings published by Academic ranking of world universities and is also a public ivy institution.
The University of Washington started in 1861 – closed thrice in 1863, 1867 and 1876 due to various reasons – but managed to award its first graduate in 1876. By 1889, when Washington entered the union, the university had not only survived but also managed to grow substantially.
The 60s and 70s were the best periods for the University of Washington since it saw exponential growth in student enrollment, facilities and budget during this time; it is one of the top recipients of federal research funds in the America.
The research budget ranks in the top five in both public as well as private universities in the United States. The University of Washington’s budget for research exceeded one billion in 2006.
This school has two hundred and seventeen majors to offer that include Biology, Medicine, Engineering, Accounting & Finance, and management.
The rate of student retention of the University is 92%. The student to faculty ratio is 10:1.
Campus
The Seattle campus of the is located on the banks of Union and Portage Bays. To its east you will find the Cascade Range whereas the Olympic mountain rest to the west.
Denny Hall is the oldest building on the campus. It was built in the French renaissance style in 1895, with Tenino sandstone. It serves as the centre of the university. The campus observatory – Theodore Jacobson observatory – lies to the north of Denny Hall. It is the second oldest building on the campus. 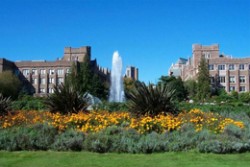